THOUGH I WALK THROUGH THE VALLEY OF THE SHADOW OF DEATH

Our story began in March of 1994, four months before our wedding. The dress was purchased.  The bridesmaid dresses were chosen. The invitations were chosen, the venue determined and all was proceeding exactly as every new bride-to-be hoped they would. On a Friday night in mid-March that changed.  Wes and I planned on going out for a date, something our busy schedules only allowed us to do two times a week, so when he called and told me he had the flu I was disappointed but totally understood.  On Sunday I checked in on him and showed no signs of improving, but instead was worsening, dramatically.  I told him I was on my way over.  When I arrived, I was exceedingly concerned.  His fever was high and he was exceedingly sick. Although he was extremely fatigued and weak, he declined when I suggested I drive him to the ER.  He said he’d make an appointment with his internist the next day and see what she said.

Monday evening, I picked him up for his 5:00 appointment and could hardly believe how much he had deteriorated in just 24 hours.  His skin was now jaundiced and had a terrible yellow tinge.  Not only was the illness affecting his skin but walking was now difficult for him.  When my calm-collected fiancée told me in the elevator on the way up to the floor his doctor’s office was found on that he was “scared,” alarm bells went off inside of me.  His internist called him back moments later and he was unable to walk towards her but instead he needed her help. Panicked, yes, I was panicked, I immediately called my mom and asked her to pray.  This was not the flu.  In the next moments Wes’ doctor called me back and told us she had notified the critical care unit at Fair Oaks Hospital who was now waiting for him.  He either had hepatitis or a paralyzing disease which had begun in his legs and would eventually move to his lungs.

Upon our arrival at Fair Oaks doctors and nurses whisked him away and began a barrage of tests during the next 24 hours which would exceed more than what they would do for most patients in a week.  Wes continued to decline, and all agreed we needed to call his parents. By the next morning he needed oxygen because his breathing was becoming labored but nothing, nothing could prepare us for the call I would receive early Wednesday morning, just 36 hours after he was admitted.  Wes had been put on a ventilator.  He could no longer breathe on his own, his kidneys had shut down and he was going into full organ failure.  He needed open heart surgery for an infection which had settled on his heart but he was much too weak to survive it. His doctors at Fair Oaks had hoped to medivac him out to Fairfax Hospital but severe winds would hinder that so in a numb-like state, his parents and I followed the ambulance to Fairfax Hospital—our new home for an indefinite number of days. Upon our arrival, his new team of doctors started him on the strongest IV antibiotic in existence at that time and we waited.  We waited. Unbeknownst to me, his doctors told his uncle they had done all they could do.

Wes became so sick so quickly each one of our days held more frightening news than the day before so on Thursday our youth group decided to fast and pray for him. Wes meant a great deal to them, and on that day, God heard their prayers.  Wes ceased to deteriorate and finally stabilized. Their faith soared, as did ours.  Each day Wes  could wait for that open-heart surgery was a day he could grow stronger and a day his chances to survive grew stronger, so his family, his friends and I sat vigil at his bedside.  Word of his illness spread and we began to receive messages — people all over the country were praying for him.  I learned something during that time.  Sometimes we are too weak to pray and it is then we must lean on the prayers, the shoulders and the strength of others.  There’s an account in Exodus 17 of the Israelites engaging in battle wherein God required Moses to hold his arms up in order to ensure the Israelites maintain the victory. Should Moses’ arms fail, the Israelites would begin to lose.  God gave him Aaron and Hur as companions to help sustain him and to hold his arms up.  Moses’ Aaron and Hur were vital for without them Moses could not have endured.  During that time, and during so many times, God has given me an Aaron and a Hur to hold my arms up.  Whether it be sitting next to me in the hallway outside the ICU, keeping me company in the waiting room, preparing food for me and the others who kept vigil day after day, never even thinking of food, I had so many Aarons and Hurs. And so we waited.

Then on Sunday, something extraordinary happened.  After being on the ventilator for four days, his dad and I noticed the machine was breathing a breath then Wesley was breathing a breath—the machine, then Wesley.  He was beginning to improve!  Eight days after being admitted, his doctors determined it was time for his ventilator to come out and we heard his voice—a sound as sweet as one I’d ever heard.  Over that short period of time, he lost 30 pounds and his 180 lb. frame was down to 152 pounds so now it was time to make him strong and prepare for open heart surgery, but the infection had left one last mark upon his body.  His kidneys were forever damaged from the infection and dialysis would be necessary the rest of his life. Devastated, Wesley nearly thought of ending our engagement for he didn’t want to “subject” me to such a life.  My tender-hearted, but misguided fiancée never asked me for my input but thankfully an exceedingly dear friend convinced him otherwise. 😉 We would journey through together “in sickness and in health, for richer or poorer,” no matter what that might mean.

Three weeks into our hospital stay, Wes continued to gain weight and his team decided to do a biopsy on his kidneys to examine the damage done.  God had only just begun to perform miracles within the body of this man.  He was determined to make Wesley a billboard of His goodness, a testimony of answered prayer and within 24 hours, the kidneys doctors believed to be permanently damaged returned with full function.  A week later we left the hospital.  The doctors determined his heart was stable and that, although both damaged valves would need to be replaced at some point, it might be one year, two years or five years before the surgery was needed. So on July 9, 1994, 400 guests joined with us in a celebration of the gift of life God had given this man and the joining of our hands in matrimony. Our Heavenly Father had only begun writing Wesley’s story.

On a Friday in November of 1995 we received the amazing news we were expecting our first little Yoder—a baby who God had gifted us with beyond anything we could have hoped for.  Three days later Wes was due to see his cardiologist for his routine check-up and, although we thought nothing of it, our lives were about to change yet again.  His cardiologist informed us the time had come to replace the valves.  I’ll never forget what I told Wes when he told me, “it was time” to replace the valves.  “What do you mean it’s time?  It’s time to have a baby!” How very much we had to learn about the timing and character of God.

The first week of January 1996, the last week of my first trimester, we went back to Fairfax  Hospital, I kissed Wesley goodbye and they wheeled him back.  A waiting room full of people sat with me while we anticipated news from his doctors and the news was good.  It would not be the first time I would lean on others to sustain me.

While her daddy laid in a hospital bed recovering that same week I walked into the radiologist’s office all by myself and saw the very first pictures of our baby girl. That tiny little miracle did something we will never ever forget—a thumb sucker even in the womb, she took her thumb out of her mouth just long enough to give me a thumbs up.  It was as if to say, “I’m okay.  Dad’s okay.  Everything is going to be ok.”  The Lord had each of them in His all-powerful hands.

Three years passed and the Lord gave Wesley the rest of what his heart longed for—a little boy.  He now had everything that once broken heart ever hoped for.

…to be continued next week 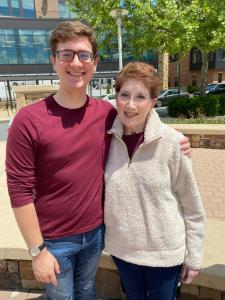